Neuroscientists have uncovered a previously unknown direct connection between the brain and the immune system — a finding that could have significant implications for the treatment of brain disorders like Alzheimer’s disease, multiple sclerosis and autism.

The discovery came as a surprise to Dr. Kevin Lee, chairman of the University of Virginia’s neuroscience department.

“The first time these guys showed me the basic result, I just said one sentence: ‘They’ll have to change the textbooks,’” Lee said in a press release Monday.

The study’s lead author, Dr. Jonathan Kipnis of the University of Virginia’s Center for Brain Immunology and Glia, echoed the sentiment.

“When we discovered the lymphatic vessels we were very very surprised, because based on the textbooks — these vessels do not exist,” Kipnis said in an email to The Huffington Post.

Though not a part of the immune system, the lymphatic system carries lymph, a clear fluid filled with white blood cells that helps remove toxins from the body. The lymphatic system is connected to every other system in the body, and was believed to end at the base of the skull.

But the researchers noticed something strange while looking through their microscopes at slides containing the membranes of mice’s brains. They saw lymphatic vessels, which had never before been observed above the base of the skull. 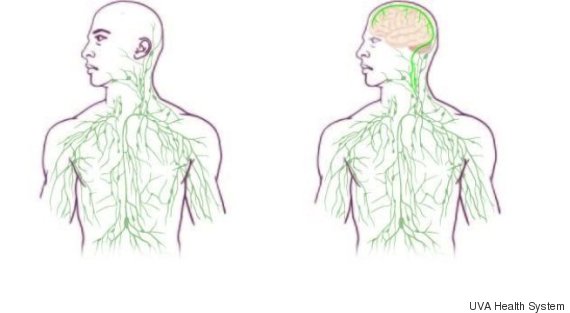 An old map of the lymphatic system (left), and a new map updated to reflect the discovery of the brain’s lymphatic vessels (right).
Why have they never been observed before? Kipnis explained that the vessels are “well hidden” behind a major blood vessel to the sinuses in an area of the brain that’s difficult for scientists to image.

While the observation was made in mice, the same anatomy is believed to exist in humans as well.

New questions. A next step of the research is to determine how the vessels might be involved in diseases involving the brain and the immune system, such as multiple sclerosis and Alzheimer’s.

“We believe that for every neurological disease that has an immune component to it, these vessels may play a major role,” Kipnis said.

Though the findings are preliminary, the researchers hope they’ll open up a number of new possibilities for treating these and other neurological disorders through therapies that target the lymphatic vessels of the brain.

For example, Kipnis explained that the findings could shed light on why large protein chunks accumulate in the brains of Alzheimer’s patients. “We think they may be accumulating in the brain because they’re not being efficiently removed by these vessels,” he said.

Other members of the scientific community have expressed excitement about the discovery, while cautioning that the findings have not yet been replicated or confirmed.

“With further research, the findings could help scientists to target inflammation in the brain, which is a factor in many neurological conditions,” James Nicoll, professor of neuropathology at the University of Southampton in England, told The Guardian.

Is Acupuncture for me?

It seems that the answer these days is a resounding “YES!” Western medicine relies on hard facts, and with the US Library of Medicine listing more than 23,000 studies on acupuncture, the evidence of acupunctures efficacy is undeniable. Another part is the desire/need for alternative treatments that are holistic, non-invasive and painless solution to a variety of health issues.

How does it work? A typical treatment involves the painless insertion of very thin needles on key points of the body in order to stimulate the body’s natural healing process. These key points run along channels called meridians in which energy known as Qi (chee), flows to all parts of the body including our organs. When a meridian is blocked, the organ at the end experiences distress and can cause pain or illness. Unblocking the meridian causes the body to release natural chemicals like endorphins, serotonin and relieves inflammation.

What are some common health issues that acupuncture can help?

Chronic back pain affects about 80% of us at one time or another and is the second most common cause of disability in America according to a study by the University of North Carolina at Chapel Hill, published in the Journal of the American Medical Association. Another study showed that patients arriving at an Emergency Room in Melbourne Australia showed that patients treated with acupuncture experienced the same amount of pain relief as the ones that were given drugs.

With headaches, acupuncture has a long track record for relieving pain from migraines and tension headaches. A recent study showed that acupuncture cut in half the number of day’s patient experienced migraines. When they did have one, the pain was greatly reduced.

With asthma and allergies over 25 million Americans have asthma. That includes 6.8 million children. Research shows that ongoing treatment reduced asthma symptoms and use of inhaled steroids. When acupuncture treatment stopped, symptoms and inhaler use returned to previous levels. Similar results were found in a separate study on allergies and antihistamine use. Of particular note was that if a health problem is controlled in childhood it is less likely to become chronic in adulthood. As a plus, acupuncture for children rarely requires the uses of needles. Since their Qi flows very close to the surface of their skin, usually all that is required is a light brushing or rubbing along the meridian path to get things flowing along. Kids usually love it and respond very well.

Continued Wellness takes a lifelong commitment to fitness, acupuncture should be used on a therapeutic level for one’s life. Doing this will ensure a lifetime of maintaining good health and keeping our bodies operating at optimum levels.

Is Acupuncture for me? was last modified: January 11th, 2022 by edward

The season of fall brings cooler weather and shorter days. As with any season, the world adjusts accordingly. Plants begin to go dormant, animals begin scrounging for food to store to get them through the upcoming winter months and humans start winterizing everything.

As fall descends on the land, it reminds us we need to start cutting back on the numerous cooling foods that are consumed during the summer months. Things like raw foods, salads, juices and fruits should be decreased because they can create too much cold in the body, according to traditional Chinese medicine. END_OF_DOCUMENT_TOKEN_TO_BE_REPLACED

Five Reasons to Get Acupuncture for Low Back Pain

Statistics show eight out of 10 people will experience low back pain at some point during their life. Seeking medical treatment for back pain is very common. Typically back pain is fleeting and can be easily resolved with rest, heat and an occasional anti-inflammatory like ibuprofen. However, once the damage is done, the recurrence of back pain can be as high as 50 percent. Part of this is because as we age, things like muscles and tendons become less flexible and pliable. It is also very well known in the United States, people are too sedentary and this leads to excess weight gain that can create added pressure on the body, especially the low back. END_OF_DOCUMENT_TOKEN_TO_BE_REPLACED

Five Reasons to Get Acupuncture for Low Back Pain was last modified: July 29th, 2019 by admin

I have the good fortune of having a practice in sunny sub-tropical South Florida. With the abundance of sunshine and a good long soak in the rainy season, we are blessed with an abundance of year-round beauty. The downside to this type of weather leads me to our topic today. In most parts of the country people tend to suffer from seasonal allergies where here in S. Florida, they can be a year round problem. When patients come to me for help with allergies it is because traditional Western Medicine methods have failed them or they are tired of taking pills and or getting shots.

As an Acupuncturist and practitioner of Traditional Chinese Medicine (TCM), I must address allergies by treating the whole person, focusing on the immune system. Only this way will the patient see substantial long term benefits.

First, we should take a look at what allergies are. Allergies are a misplaced, learned response by the body’s immune system triggered by an allergen like pollen, dust, etc. The immune system rapidly responds with symptoms like itchy eyes and throat, sinus congestion, sneezing, and even diarrhea. On the inside, your body releases massive amounts of antibodies known as mast cells. They reside mostly in our lungs, upper respiratory tract, stomach lining and the skin. Another type of antibody is more common with food reactions. Some people may not be sensitive to a single allergen but if two or more allergens are present, a reaction may be triggered. For example; you have a sensitivity to cows milk and cypress pollen. You drink milk daily without issue. The second cypress pollen is introduced into the mix, you react. Avoiding dairy products (lessening your “allergic load”) during the season for cypress pollen may relieve symptons.

Western therapies that help with allergies are antihistamines (Benadryl, etc.). Asthma type drugs like Albuterol, epinephrine and decongestants. Western medicine also emphasizes avoidance, filters and even desensitization over time by injecting small amounts of the allergen(s). Again, Western Medicine is treating the symptoms of the patient without ever addressing the cause.

An Acupuncturist will look at more deeply rooted signs in each person. Again, the principle is to treat the whole person. Often, a person with chronic allergies will present with spleen or kidney deficiencies as well as lung issues. Here is an example of treatment for “John” who has been suffering with allergies for a month. He hates the drowsy feeling he gets from the medication prescribed by his doctor and wants to try a holistic approach. He had all of the classic symptoms for allergies. After a thorough exam, John and I came up with a specially tailored health plan including a blend of Chinese herbs. I advised John to avoid dairy, excessively sweet products and spicy foods. As John improved I developed a plan to strengthen his immune system in preparation for the next allergy season. Part of the plan was to replace coffee with green tea which is rich in catechins (known for their rich anti-allergy effects.), and quercitin (a bioflavenoid known to stabilize mast cells thus slowing the release of histamines.) John responded very well to his treatments and is now allergy free. He continues to get ongoing wellness treatments as part of a comprehensive health plan specifically tailored to all of my patients based on their needs, lifestyle, etc.

If you are suffering from allergies , another health issue and/or just have questions, you can call my office for a free initial consultation and personalized treatment/wellness plan.

Allergies and Sinusitis was last modified: August 19th, 2015 by edward